Explore History Revisits The Mysteries of The Pyramids at Giza

Travel and History for the International adventurer

Explore History is one of the latest titles premiered by the shockingly prolific Imagine Publishing Company.

As with all of their publications, Explore History is graphically stunning, exhaustively researched and endlessly entertaining. It is a fresh and unique combination of Archeology, Anthropology, History and Travel reporting. Explore History provides the type of in depth analysis of International Destinations that is the life-blood of the Culturally Obsessed.

In the first two issues, the Explore History Team took us to Petra and Prague and showed us the History and Artifacts of the Native Peoples of Australia and Peru.

Now in Issue three, we visit The Palace of Versailles, dream of International Rail Travel and take a peek into the continuing mysteries surrounding the Pyramids at Giza.

The Pyramids at Giza

Time has NOT been good to the Pyramids at Giza. With their Polished Limestone Exteriors Stripped and their Burial Vaults Raided, very little is left behind to help us decipher the true nature of these impressive structures.

The city of Giza sits on the Nile approximately Twelve Miles Southwest of Cairo. There the Pyramids stand alongside The Great Sphinx of the Pharaohs. No other tableau of the Ancient World is more recognizable.

Unfortunately, even after centuries of exhaustive Archeological Studies, very few of the secrets hidden within these ancient structures have been revealed.

What we do know is that among them The Great Pyramid was built during the Old Kingdom Period under KIng Khufu in the 26th Century B.C.E. It was to be a monument to the Glory of his rein in Egypt.

Taking over twenty years to build, Khufu’s triumph was an enormous step forward in engineering and construction, resulting in the first truly “pyramidal” pyramid.  Former tombs were flat-topped buildings more commonly associated with the Temples of Mesoamerica.

On our journey to Giza, we are not only taken on an exploration of the History of the desert giants, like the Great Pyramid, the Explore History Team also details the up-to-the-minute scientific efforts that are being used to dig deep into the unknown inner structure of the tomb.

The use of non-invasive techniques  is essential for examining this monument to the past, as it is the Last of the Seven Wonders of the Ancient World. The combined technologies being used to image The Great Pyramid of Giza include infrared thermal scanning, muon particle radiography,  and laser-mounted drones.

The surface of the earth is constantly being bombarded by high-energy atomic particles created in the Upper Atmosphere by the Extra-Solar Radiation known as Cosmic Rays. One of the particles created is the Muon.  At the Great Pyramid of Giza, Muons are monitored as they penetrate the surface and pass deferentially through the solid rock to reveal the internal chambers within.

The initiative, run by the International “ScanPyramids” Project is in the process of using this and the methods mentioned above to create a detailed 3-Dimentional Model of The Pyramid. While they hope that these methods can be used to shed light on the mysteries hidden inside, the work so far has resulted in more questions than answers. As is always the case in science, the new questions that arise from the data are driving the development of more sophisticated technology in the pursuit of what one days may be definitive answers.

We end our visit to the Pyramids with travel tips to the region: time of year to visit, advice on establishing pricing for taxi or camel transport and, of course, the recommendation to pack PLENY of water…..Summer OR Winter, it IS the desert.

Unfortunately, a brief examination of travel advisories to tourists online, suggest that a trip to Giza right now might NOT be the best idea.

Luckily, there are other destinations for viewing the Art and Architecture of Egypt.

The British Museum: The Finest Collection of Antiquities outside of Egypt

The Egyptian Museum of Berlin: The home of the Bust of Nefertiti 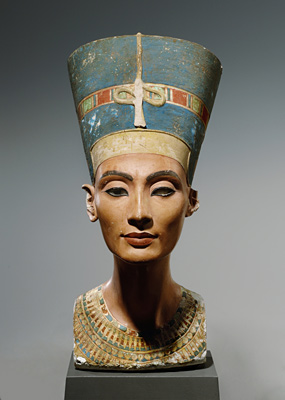 Museum of Fine Arts Boston: My home base, one of the top ten collections in the world….and a nice sketching location

The Metropolitan Museum of Art: My first childhood exposure to the wonders of  Egypt and the Home of the Temple of Dendur. NOTHING compares to sitting in the cavernous glass gallery that houses the temple in the middle of a snow storm.

I searched my library for further reading on Travel to Egypt and found the following titles:

While a 2016 edition is available, unless I’m getting on a plane, I can’t imagine that SO much has changed in a Six-Thousand Year-Old Culture.

This exquisite out-of-print series of guides speaks to a age of elegance in publishing that will not soon be seen again.

Who needs a time machine when you have a Baedecker.

All Pyramids of Giazh: Ricardo Liberato

If You Enjoyed this, don’t Forget to Subscribe for more science, History and Culture